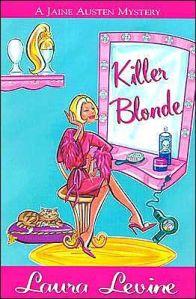 “A gal with a serious Ben & jerry’s habit and credits including a tome entitled “I Was Henry Kissinger’s Sex Slave” can’t afford to be too picky about employment opportunities. So when Beverly Hills socialite Sue Ellen Kingsley offers Jaine megabucks to ghostwrite a book of hostess tips, it’s time to sharpen the #2s. So what if Jaine has to take dictation from a rail-thin lady of leisure in a bubble bath? Pride doesn’t feed the cat and the dubious side benefit of this particular job is an up-close, personal view of the amorous exploits of Hollywood’s ladies-who-lunch. The only bright spot is sixteen-year-old Heidi, a girl after Jaine’s own heart. Shy, overweight, and oppressed by her step-mother, Sue Ellen, Heidi could use a friend as much as Jaine could use an ally. But everything short circuits when Jaine finds Sue Ellen floating face down in her tub, fried by her own blow dryer. Peroxided suspects abound, including a very private masseuse, a jealous nurse, a former game show hostess… even a closet blonde with a surprising secret. One of them is hiding a murderous heart behind pricey highlights, and laine’s out to expose the killer’s dark roots. Because blondes have enough fun without getting away with murder…”

Jaine has pretty bad luck. She ends up with some not-so-great writing jobs and she has pretty bad luck in the romance department too. This time around she’s been hired to help ghostwrite a book. When her employer ends up dead she decides, once again, to investigate the crime in order to clear the number one suspect. I get the feeling that Jaine isn’t the best freelance writer around (Flushmasters anyone?), but apparently she’s not the best private investigator either. When she does figure out whodunit, it’s usually seconds before the killer pulls a gun on her and threatens to shoot her (but not before they brag about their entire plan first). Of course, I typically don’t figure out whodunit until Jaine does so I’m not picking on her or anything. She does tend to wrongly accuse a lot of people before she finally stumbles into the truth and she ends up in some funny, and often dire, situations, many of which, can be related to.

Levine has created a great character in Jaine as well as a great cast of supporting characters. The emails Jaine receives from her parents who have moved to a retirement community in Florida are hilarious. (Personally I’m hoping for a visit from Mom and Pop Austen in a future book.) Her best friend Kandi is forever searching for Mr. Right. And she’s pretty sure she’s met him in every book. And then there is Jaine’s roommate, her cat Prozac, one of the funniest pets in fiction I think.